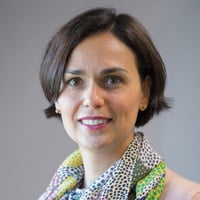 Teresa Fragoso has been president of the Commission for Citizenship and Gender Equality (CIG) since August 2016, following a previous tenure in the same position in 2011–2012.

Ms Fragoso’s previous roles include working as a political adviser to the Portuguese Secretary of State for Citizenship and Gender Equality (2015–2016) as well as to the Portuguese Secretary of State of the Presidency of the Council of Ministers, with responsibility for gender equality and international relations (2005–2008). She has also worked as a gender and development specialist with UNWOMEN in East Timor (2009–2010).

Ms Fragoso has an MSc in “Gender and the Media” from the London School of Economics. She is currently completing a PhD in public policy at ISCTE – Lisbon University Institute on the subject of parental leave and fathers’ rights across the EU.

Portugal is bound to The Convention on the Elimination of all Forms of Discrimination Against Women – CEDAW – which was ratified by the law n. 23/80, on the 26th of July.
Its 6th article clearly states that “States Parties shall take all appropriate measures, including legislation, to suppress all forms of traffic in women and exploitation of prostitution of women.”

The penalization of pimping also derives from the Convention for the Suppression of the Traffic in Persons and of the Exploitation of the Prostitution of Others, from 1949, approved for ratification by the resolution of the Assembly of the Republic n. 31/91 (published in the Diário da República, I, 10th of October 1991).
Therefore, our legal framework does not penalize the conduct of the person who prostitutes herself. It criminalizes the exploitation of the prostitution of a third person (pimping).

This conduct is punished more severely (with a sentence of 1 to 8 years) if the person resorts to violence, serious threat, ruse, fraudulent tactics, abuse of power derived from family or guardianship, or hierarchical, financial or work dependency, or if the person takes advantage from the mental disability of the victim or a situation of particular vulnerability (“qualified pandering”).

It has previously been argued that the penalization of simple pimping is unconstitutional, according to principles of sexual freedom and neutrality of the Penal Law in respect to sexual morality. However, the Constitutional Court (in its rulings 144/04 and 303/04) has not followed that argument, stating that prostitution always presupposes an exploitation that goes against the dignity of the human person, in which the Portuguese State is based (according to article 1 of the Constitution);
It is important to clarify that legalization is different from decriminalization. The decriminalization of the conduct of the person who prostitutes herself is already in the law;

Legalization would necessarily imply the decriminalization of pimping, which is penalized today. To legalize would go against the position of the Portuguese State, as I have described before;

To legalize would mean that the State considers prostitution to be just another profession, derived from a free choice that dignifies the human person;
The sexual exploitation of another person would cease to be thought of as a criminal activity and it would have the same recognition as any other work activity, subjected to the same labor and fiscal regime;
But we know this is a complex reality and we cannot hide the fact that its often situations of extreme need, social exclusion and lack of opportunities that lead to contexts of sexual exploitation. Therefore, that “free choice” is always mitigated by these constraints;

It is not an accident that most networks of sexual exploitation have as main source areas, countries or regions filled with misery and lack of opportunities;

The question of the legal standing of prostitution involves other, broader questions related to the relation between the Law and Ethics, between self-determination and the dignity of the human person. The work of CIG, in agreement with the Constitution and the Portuguese legal framework, has followed that guideline for decades;

Equality between women and men is a fundamental principle of the Constitution of the Portuguese Republic, and it is a fundamental task of the State to promote it. The Commission for Citizenship and Gender Equality (CIG) is the national institution responsible for the promotion and defense of that principle, trying to respond to the profound social and political changes of our society related to citizenship and gender equality;

The mission of CIG is to guarantee the execution of public policies in the areas of citizenship, promotion and defense of gender equality and combating domestic and gender-based violence, human trafficking and discrimination of LGBTI people. CIG is also in charge of coordinating related public policy tools (ENID and National Plans).

It fulfills that mission in close cooperation with other key agents of our society, like the non-governmental organization for women’s rights and gender equality. It is in that context that the Pequena Subvenção (Small Subvention) – technical and financial support to NGOs for women’s rights – exists, which financed the project of the PpDM “Violence against women and the system of prostitution – EXIT”, the framework of this international conference.

Lastly, I wish PpDM and the other organizations present here who devote themselves to the promotion of equality between women and men can continue their projects and their good work.