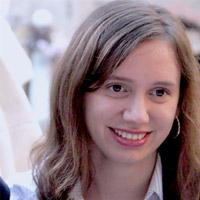 Roxane Lundy is a supporter of gender equality. She became politically active after becoming a member of the association “Osez le Féminisme”. During the summer of 2014, she worked with MP Maud Olivier on the abolition of prostitution and joint the « Mouvement des Jeunes Socialistes ».

At the beginning of 2017, she worked at the Secretary-General of Benoit Hamon’s presidential campaign before becoming a member of the board of the “Mouvement des jeunes
socialistes”. She was elected President of the MJS France in February 2018 and joint Génération-s, the ecologist and socialist political movement founded by Benoît Hamon.

She aimed at continuing to support the cause of feminism to an even greater extent in this political movement.

Because our generation must be able to choose in which world it will live. We inherit a society deeply marked by inequalities, where you will have neither the same rights nor the same constraints according to your gender. It’s up to us to break this injustice and impose a new system of values.

That’s why we are convinced that it is essential for youth to take up the fight for the abolition of prostitution. It is up to us to affirm that we aspire to live in a world free from male domination and economic exploitation : a world of solidarity and respect for human rights. We have to hammer out the idea that prostitution is not sexuality, but domination, whether it is male domination and / or domination by money. While the system of prostitution makes violence a supreme norm, we — young progressive and feminist — make the choice to stand on the side of human dignity to build a society that guarantees sexual freedom and equality between women and men.

In France, we managed to mobilize. Our generation is very much concerned by this issue: 73% of the 18-25 year olds are in favour of penalizing clients. Alongside several student unions, feminist associations and youth leftist organizations, we launched in France a collective called “Youth for Abolition” in September 2013 to make our voices heard in the debate that could animate the political scene.

The adoption of the law in April 2016 has opened new rights for prostituted people and victims of human trafficking. It is based on 4 pillars:

1. First of all, the fight for the abolition of prostitution is at the heart of the fight for gender equality. One can not accept the idea that a woman’s body can be bargained, reduced to an object for the sole purpose of satisfying a man’s desire. To sanction the recourse to prostitution is to forbid the imposition of a sexual act by financial constraint, to make a monetary consent.

Boys must grow up knowing that it is forbidden to seize the body and sexuality of others by force or money. It is also a powerful message sent to girls to remind them that they have the right to live their sexuality in complete autonomy. It’s about defending sexual freedom and autonomy. We want sexuality to be based on desire, not money, nor violence. With programs of prevention and sexuality education, it is the violence of gender that can be reduced and free women and men.

2. Then, the abolition of prostitution represents a real progress for prostitutes who are people in situations of great vulnerability.

Our claim is clear : shame has to switch sides. It would be unthinkable that the voices of prostitutes should not be heard while a tremendous speech-freeing movement has emerged with MeToo.
Thanks to this law, in France, prostitutes can no longer be prosecuted since the offense of soliciting is finally repealed, but the customers, who feed the prostitution system, are liable to a fine of 1500 euros. All means have to be put into effect for the effective application of the law. In this way, society admits that prostitutes are no longer delinquents. On the opposite, the law recognizes the harm done to them in prostitution and opens up new ways to support them.
It is the duty of our countries to assume their commitment against any exploitation of their citizens and of foreign people among the most vulnerable and in particular women and children. Prostitutes enter the system very young, at 14 years on average.

While some people would like us to renounce to change the society and explain that we can do nothing against “the oldest profession in the world”, we must bear in mind that the desire to abolish prostitution is also important for human rights than slavery.

France was the fifth country to adopt a real abolitionist policy, alongside Sweden, Iceland, Norway and Canada. Now, the fight against the system of prostitution must now extend to all Europe. If we continue to mobilize today, it is because we want as many people as possible to have access to these new rights. Brave struggles are going on everywhere in Europe. First victories were won such as with the Honeyball report on sexual exploitation and prostitution. Edward Young said that Youth was « the season of action ». Well, all over Europe, progressive youth must act for the abolition of prostitution.